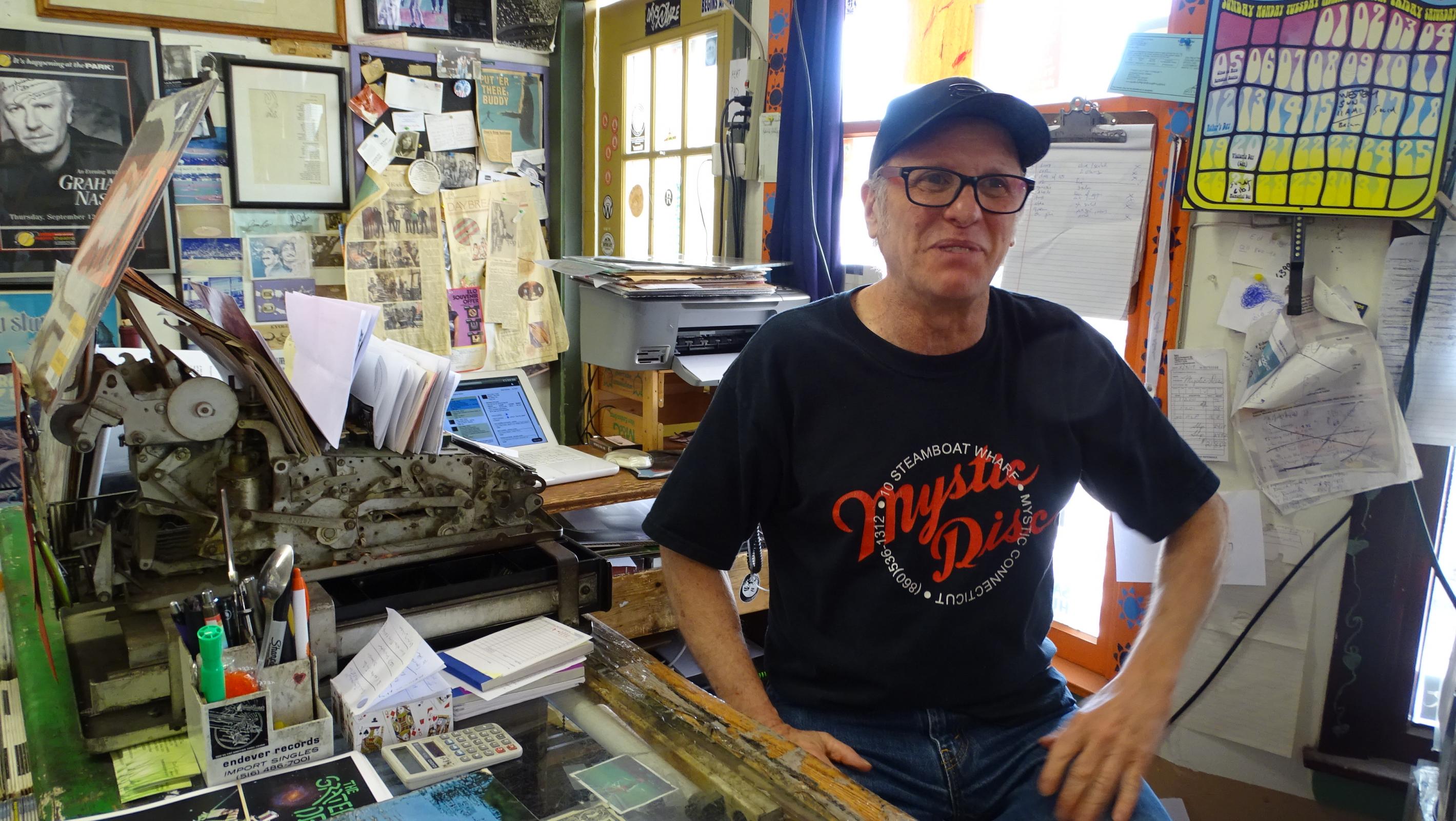 The music enthusiast website Vinyl Me, Please recently recognized Mystic Disc as the Best Record Store in Connecticut. Now a new wave of fans knows what locals have known for decades.

Not long into our conversation with Dan Curland, long-time owner of Mystic Disc, he revealed an authoritative memoir on the Woodstock Music Festival and pointed to a picture of himself among the crowd. Later in the discussion, Dan described buying his first record, Elvis’ Hound Dog on 45, when he was four years old. Dan’s personal album collection numbers in the thousands. He is also a musician himself. Dan’s profound passion for music accounts for his longevity in an unassuming storefront in Downtown Mystic. Our wide-ranging conversation offered some insights on the history of Mystic Disc.

HOW IT ALL STARTED

After growing up in Norwich, Dan found himself in Colorado as a young man and happened across a used record store, an experience he remembers to this day. Eventually Dan made his way back to the East Coast in a roofless VW Van and started working at Caruso Music in New London. In 1983, Dan and fellow musician Wall Matthews took a chance and opened Mystic Disc, buying a thousand-disc private collection and organizing the records for sale on hand-built shelving.

Dan’s 37 years in business at 10 Steamboat Wharf have seen plenty of ups and downs. When CD’s became all the rage in the 1990s, Mystic Disc embraced the trend, selling CD’s and records alongside each other. But the 2000s brought a competitor to vinyl that Dan couldn’t welcome:  file-sharing websites like Napster. In the face of some good-natured ribbing from friends and colleagues, Dan insisted that ‘records would outlast’ other forms of music media. He based his theory on the science that mp3s lose 95 percent of their fidelity in the file compression process. Nonetheless, as a CD & record store in the age of the iPod, times were lean.

In 2008, with the help of Mystic Army Navy Store owner Rich Freitas, Dan transitioned Mystic Disc back to selling vinyl records exclusively, stating defiantly, “If I’m going to go down, I’ll do it my way!” Around the early 2010s, enthusiasm for vinyl began a resurgence, making Dan a virtual prophet. Today audiophiles both local and from far sojourn to Mystic Disc to find that one album that’s missing from their collection or just to browse what’s new on the shelves.

THE FUTURE OF MYSTIC DISC

Dan insists he isn’t going anywhere. To him, Downtown Mystic is the prime example of a mixed-use downtown as the backbone of a healthy community. He says he would never have made it without the support of the local community. So if you need to keep building your personal vinyl collection, or if you’re ready to start one, go talk with Dan or his assistant Matt. Maybe you want to begin with the iconic albums that are always in demand – Miles Davis’ Kind of Blue, Steely Dan’s Aja or Rumours by Fleetwood Mac. Dan’s advice would be, start with the music you love. Whatever you need, Dan keeps their complete inventory in his head, and if they don’t have it, he’ll help you find it.