As part of their research, the Conservation Commission conducted a web-based survey of residents and businesses in Groton regarding their views on a potential plastics reduction ordinance. Over 450 respondents provided feedback. Among the key findings, nearly two-thirds of the businesses which responded are committed to reducing single-use plastics. Among residents who responded, 72 percent are either “very much” or “completely” committed to reducing single-use plastics.

The Conservation Commission reported back to the Town Council early 2019.  Following the report, the Town’s Office of Planning and Development Services was tasked with drafting a proposed ordinance which would prohibit the distribution of single use plastic bags, plastic cutlery, plastic stirrers, and plastic straws. The regulation would have a six-month phase-in period following adoption.

Measures to reduce the use of single-use plastic are currently gaining momentum in the region. Private organizations are adopting voluntary practices to decrease their plastics consumption such as Mystic Seaport Museum which uses plant-based straws and cups and pasta stir sticks for their food services.

The Town of Windham recently adopted an ordinance which prohibits any business from providing or selling a plastic checkout bag to consumers.

In April, the Town of Stonington passed an ordinance that bans single-use plastic bags as well as straws, which can be made available on an “upon request only” basis from food vendors to allow for those who need a plastic straw to ingest beverages, such as the disabled and the elderly.

There are some key differences between Groton’s current draft ordinance and the regulation passed by Stonington. For instance, Groton’s draft ordinance extends the ban on single-use plastic straws to include fast food establishments while Stonington’s ban applies to “Fine Dining Establishments” only. The key differences are summarized in a memo presented to the Town Council. 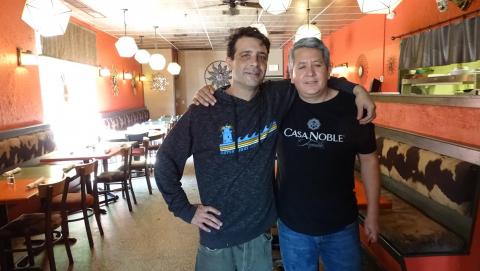 Manana Café is one of Groton’s businesses already taking voluntary actions to reduce plastic consumption. Owner Justin Primeaux reports that when they switched to using paper straws they also made the straws available by request only. So although the per-unit cost of paper straws is higher, they are using fewer of them, and customer response has been so positive that a recent yelp.com reviewer lauded the new policy.

As part of the next steps, the Town Council plans to organize one or more public events to gather feedback in advance of a formal public hearing. Details about these events will be posted on the Events Calendar. Comments may be sent at any time to Bruce Lofgren, Planner with the Town of Groton, at blofgren@groton-ct.gov.