CEO: Electric Boat could double in size in 6 years

As Groton’s Electric Boat began construction of the first submarine in the U.S. Navy’s new Columbia ballistic-missile class, the CEO of parent company General Dynamics said Wednesday she anticipates the subsidiary doubling in size over the next half decade, a faster expansion than previous projections.

Electric Boat operates Connecticut’s single largest employment site in Groton where about 9,000 people work at the shipyard, with another 3,000 at an engineering center across the Thames River in New London.

Nov 16 2020
The town is planning to create a “stockpile” of Personal Protective Equipment to help battle COVID-19. Economic and Community Development Manager Paige Bronk said the town is looking to use a $150,000 state grant to purchase a variety of equipment such as masks, gloves, hand sanitizer, sheet plastic, duct tape and plexiglas...Continue Reading 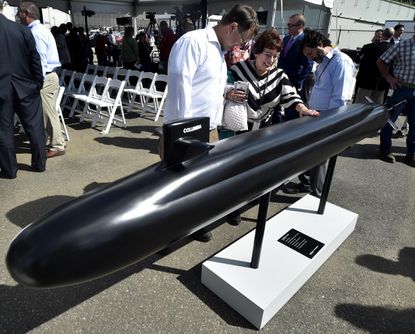 Nov 6 2020
General Dynamics Electric Boat announced Thursday a $9.5 billion U.S. Navy contract for the first step in construction of the next-generation Columbia class nuclear submarine to be built at its shipyards in Groton and Quonset Point, Rhode Island. The massive project will be a significant boost to the submarine manufacturer an...Continue Reading