Learning to Fly in Mystic

Fearless Flyers Academy Offers Experience Unlike Any Other in New England

Our region is known nationwide for our underwater expertise and submarine base. But here’s something you might not know: you can also visit the Groton area and learn to fly!

The Fearless Flyers Academy opened in Mystic in 2015. The massive indoor facility offers flying trapeze, aerial and trampoline classes year-round. Owner Ally Altman launched the business in New Hampshire in 2013. But growth was limited because the facility was outside, and classes could be offered on only a seasonal basis.

Altman was inspired to move Fearless Flyers to Connecticut after connecting with a fellow trapeze enthusiast who had the power to help: Mystic Business Park owner Tim Tylaska.

The Move to Mystic

Altman and Tylaska met at the Trampoline Place in Plainfield, Connecticut. Tylaska is a fan and participant in trapeze. When he heard that Altman had been searching for a way to expand Fearless Flyers and offer classes all year, he offered a solution.

“To hold trapeze classes indoors, you need a large, open building with ceilings at least 40-feet high. It’s tough to find a building like that and we had been searching for a while,” Altman said.  “Tim offered to build a warehouse at the industrial park, and lease it to us. He saw the value in bringing a unique business to the Groton area that could benefit the entire community. That’s how we ended up in Mystic, and we love it here.” 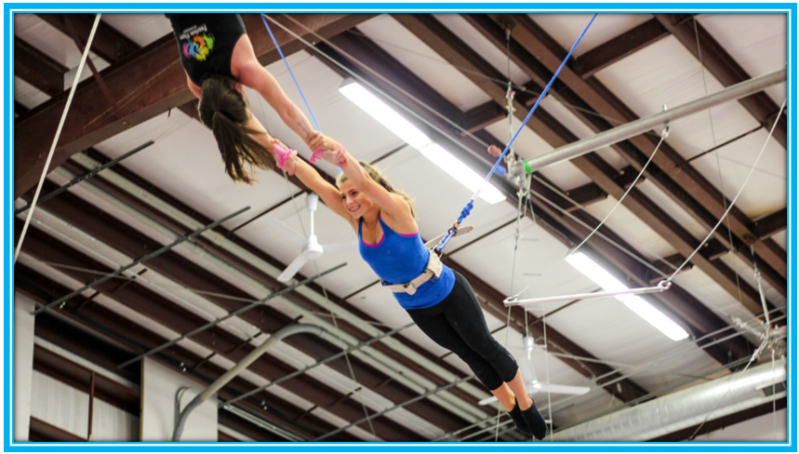 The academy is the only indoor flying trapeze facility in New England. People travel from across the region to take their turn above the net. Altman said her gym has the potential to exponentially increase tourism, especially during the winter.

“There’s less to do during the colder months. The seaport is great, but few people want to spend a lot of time on the water when it’s freezing. We already have people driving from about two hours away to take classes,” Altman explained.

“We have become a premiere destination for people who want to try trapeze. People travel here to take a class, stay a weekend and end up exploring other parts of Mystic and Groton. As more people hear about Fearless Flyers, I think it’ll really bolster the entire tourism industry in this community.”

The Benefits of Trapeze

New customers are often joyfully surprised to learn just how easily they can learn trapeze skills, Altman said. “Some people think this is just an activity for kids, but in reality, the majority of our participants are adults. Trapeze is much easier on the body than gymnastics, which can be dangerous for adults. People take a class for the first time and are amazed at all they can do. They say, ‘I never thought I could flip through the air like that!’” 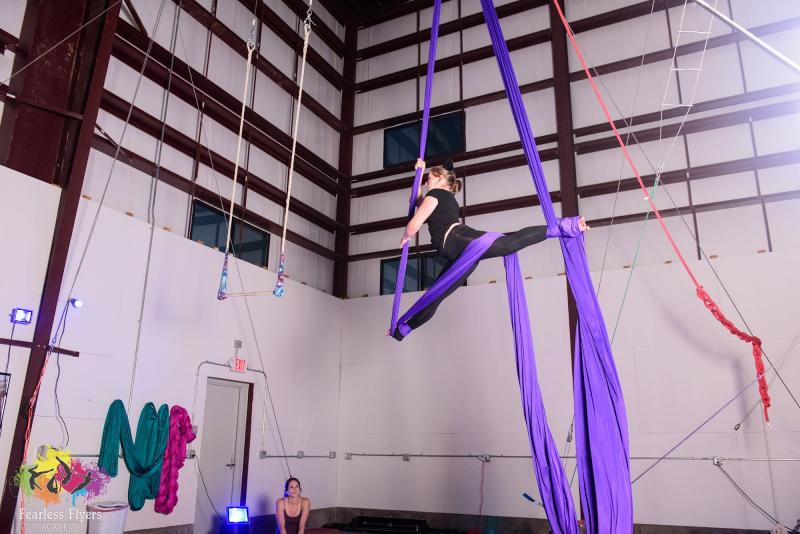 Altman has been flying for more than a decade herself. She described trapeze as a “unique way to incorporate fitness” into a regular routine. It can also inspire people to overcome fears and challenges.

“We have a lot of people who come to us who are afraid of heights. But this is actually a fantastic way to deal with that fear. You’re strapped into a harness and there’s a net below you. We’ve helped a lot of people alleviate that anxiety.”

Altman also described the power of trapeze to dramatically improve a person’s mental outlook. “We’ve seen kids and adults alike come in and had their entire perspective on life changed for the better because of the empowering feeling they get from trapeze. It gives them confidence because they realize they can do things they never thought were possible.”

In addition to flying trapeze, the Fearless Flyers Academy offers classes in Olympic Trampoline and Aerial Fitness. The academy recently added Hooping classes to its roster as well.  You can learn more about the classes here.

Off to the cardboard boat races

Sep 19 2018
Despite activity not seen in decades due to increased military spending at the federal level, finding and retaining a skilled workforce remains a huge challenge, executives from Connecticut's big defense contractors said Tuesday morning. They were speaking at the first-ever U.S.–Australia defense summit, a two-day event hosted at the Mystic Hilto...Continue Reading

Sep 19 2018
LBI Inc., a research, development, engineering and manufacturing company that specializes in marine and naval systems, has been awarded a $5.4 million contract to design and manufacture a launch and recovery system for unmanned underwater vehicles for the Navy. The five-year contract is for a lightweight system to launch and recove...Continue Reading