How do we attract more retailers and service providers to Groton?

Over the past two years, the Town of Groton’s economic development staff and partners have been working to implement projects and initiatives proposed in the 2016 Economic & Market Trends Analysis, which includes a strategy to attract private investment to the town’s commercial corridors. Identifying and capitalizing on retail market opportunities requires the town have a clear understanding of what demographic data and other information retailers and commercial investors consider when determining where to locate. This best positions the Town to attract the type of investment we’d all like to see.

What are retailers looking for?

When determining where to locate, retailers examine resident, workforce, and visitor characteristics of a region to gain an understanding of the potential customer base that fuels business sales. One of the many things retailers look for when making location decisions is the area’s income levels.  A question that Groton was asked by potential developers and retailers was “what impact does the military base population have on Groton’s income levels?” We explored this question and found that the difference between military income and civilian income levels in Groton is marginal and has little impact.

So, how do Groton’s income levels stack up?

There are four main income indicators:

As of 2016, the average household income of the Town of Groton was $83,724 and projected to rise to $96,732 by 2022. The four income metrics are provided in the following table, benchmarked against New London County and Connecticut.

Why are income levels in Groton below the surrounding region?

While there is not one single answer, many have wondered if the presence of the Naval Submarine Base New London in Groton is a factor and if, in fact, the income data presented by the Census might be understated – giving potential retailers an inaccurate picture of Groton’s consumer market.

It’s a reasonable question. The military population, including dependents, comprise approximately 27% of the town’s population, with civilians making up the remaining 73%. Military households are an important consumer market segment in Groton and, therefore, it is important to understand how the income in households with military personnel is represented in key data metrics.

So, it’s safe to say that retailers relying on income data from the Census are getting an accurate picture of the town’s income levels and can confidently use this data to determine if the area aligns with their targeted demographic.

Retail site location is not about one factor; it is a complex process that includes significant research and analysis of hundreds of data points. In addition to an area’s income metrics, retailers look at factors including other demographic characteristics and area-specific information to create a shortlist of location options. Other common indicators used by retailers include:

Taking all of the above into consideration, Groton’s economic development team is working to create an attractive environment for retailers to invest in.

The Town of Groton Planning and Economic Development staff are currently involved in a number of ongoing initiatives aimed at improving Groton’s retail market as well as the community’s “sense of place”. Zoning revisions are underway town-wide with the intent of simplifying business development and investment in Groton’s commercial areas. The town also adopted Tax Increment Financing (TIF) as a mechanism for facilitating investment in high-quality mixed-use developments.

In conjunction with these efforts, town staff members are actively promoting the community as a great place to live and work through both digital and printed marketing materials. This effort is aimed at attracting businesses and new residents with promotional messaging about the local quality of life.

Further, the town staff actively supports local retailers and other small businesses through a suite of resources, including financing options and incentives, networking opportunities, technical assistance, and referrals to business consultation experts.

Questions on this information should be directed to the Town of Groton Office of Planning and Development Services at (860) 446-5995. 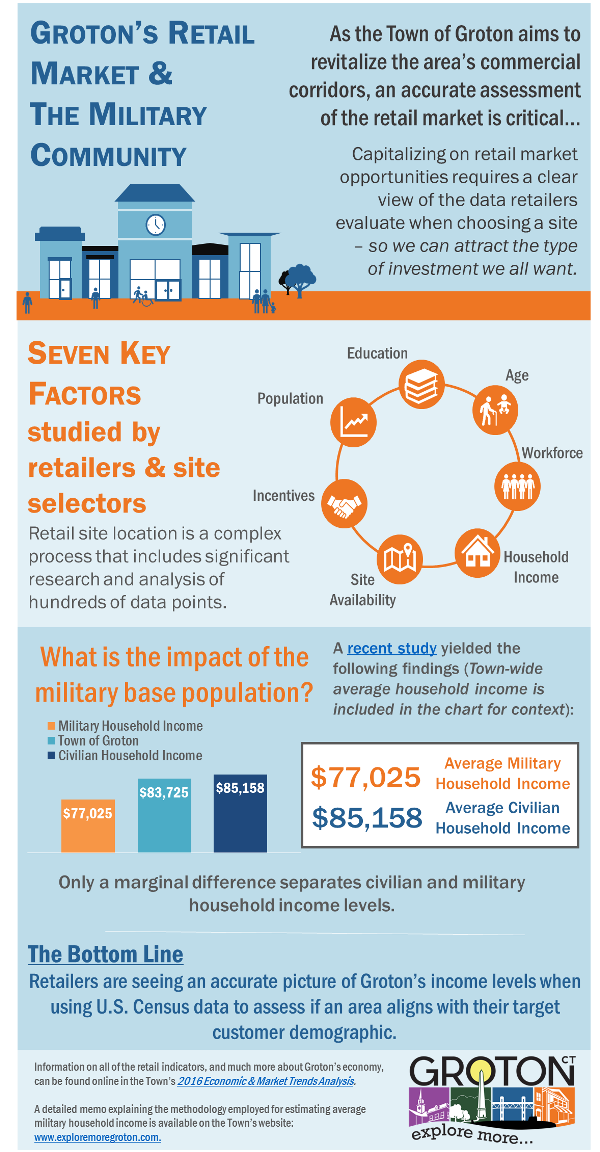